I imagined to myself that it would be nice to have guests relax and enjoy themselves when they came back to the inn from sightseeing in Kyoto.

The flowers painted on the gilt clouds are, left to right, Chinese peony, Japanese iris, and Japanese hydrangea. These are all flowers that have been in Japan for hundreds of years. The large gorgeous peony also features in proverbs that compare it to a beautiful woman. The iris (hanashobu) is a flower especially loved by samurai, because “shobu” (sweet flag) sounds the same as “shobu” (victory or defeat), and its leaves look like swords. At the Heian Shrine, you can see magnificent irises from late May to mid-June. The hydrangea is a flower so deeply associated with Japan that it is included in “Manyoshu,” the oldest poetry collection in Japan. It is loved in Japan so much that it has become a byword for the rainy season. Hydrangeas, which become more lustrous and beautiful when wetted by rain, flower everywhere.

Between these flowers, I painted the “Aoi Matsuri” (Hollyhock Festival), the “Gion Festival,” and the “Festival of the Ages” that are said to be the “three biggest festivals in Kyoto.”

The one painted below the peonies is the “Hollyhock Festival.” Speaking of the festivals held since the Heian period, it is the “Hollyhock Festival.” Originally, it was celebrated mainly by the aristocrats. Every May, a procession made up of the nobility and the Imperial Messenger, the Saio-Dai wearing twelve layers of clothes, magnificently dressed in costumes of the time, travels from the Kyoto Imperial Palace to the Kamigamo shrine. What I painted as a motif of this Hollyhock Festival is the Saio-Dai and oxcarts. The Saio-Dai is a maiden dedicated to the Kamigamo shrine. Each year, one person is chosen from the women of Kyoto. She puts on the twelve layers of clothes and travels with the Imperial Messenger. The oxcarts are the vehicles used to transport the nobility in the Heian period. At the Hollyhock Festival, they are decorated with hollyhock, katsura, sakura, and tachibana (mandarin orange) flowers.

The one painted below the irises is the Naginatahoko float of the Gion Festival. The Gion Festival is a festival of ordinary people, which came into being to ward off evil at a time when an epidemic was rampant in Kyoto. It has been held since before 1100. At the time, there were 66 countries in Japan, and, accordingly, the 66 halberds are said to have been consecrated. During the long history, the number of halberds came down to 33. After overcoming many hardships such as the war, the festival has been continued. Among the floats at the Gion Festival, the Naginatahoko are the only ones that children ride and are the important floats that always take the lead during the procession. When they turn a corner, bamboo is spread beneath the wheels, and they take the lead in taking the turn. This is called tsujimawashi (turning of floats), and one is overwhelmed by its power. The Naginatahoko are made at Naginatamachi, situated close to the Luck You, and you can watch them being assembled when it comes time to prepare for the Gion Festival.

Next to the hydrangeas, I painted scenes of the “Festival of the Ages.” The Festival of the Ages is called the “scroll depicting the customs in Kyoto history.” Every year, it is held on October 22, when the capital was transferred from Nagaokakyo to Heiankyo. The interval from the Enryoku period that began in 782 to the Meiji restoration is divided into eight periods, and a procession of 2,000 people travels about 2 kilometers from the Kyoto Imperial Palace to the Kamigamo shrine, in faithfully recreated attires and carrying faithfully recreated ritual implements of the time. What is depicted is the Procession of Meiji Restoration Imperial Army and the Procession of Sacred Carriages. The Procession of Meiji Restoration Imperial Army is marching at the front. It is an army made up of peasant farmers who supplied lumber in Heiankyo and were called “Yamagunitai” (Mountain country corps). They were active in the Boshin Civil War. Because drums and flutes were played as they made a triumphant return from Kyoto to Yamaguni, the procession, too, marches to the sound of drums and flutes. The Procession of Sacred Carriages is made up of the portable shrines of Emperor Kanmu and Emperor Komei, who are the deities of the Heian shrine, and brings up the rear.

In addition, I painted a dance of dedication by maiko (apprentice geishas), performed as the end of the Gion Festival. The dance with handheld fans below the peonies is the “Konchiki Odori” performed by maiko of Miyagawacho, and next to it, the “Komachi Odori” performed by maiko of Gion Higashi with drums in hands. The dance with umbrellas beside the hydrangeas is the “Suzume Odori (Sparrow Dance)” performed by Maiko of Gion Kobu. The choreography has its origins in the Shita-kiri Suzume (Tongue-cut Sparrow) of the folktale. The children dressed as white herons above the hydrangea leaves are performing the “Sagi Odori (Heron dance).” It is said that, during the Gion Festival about 600 years ago, it was performed around one float, called a “Kasasagihoko.” The “Kasasagiboko” float has disappeared, but the dance continues to the present. 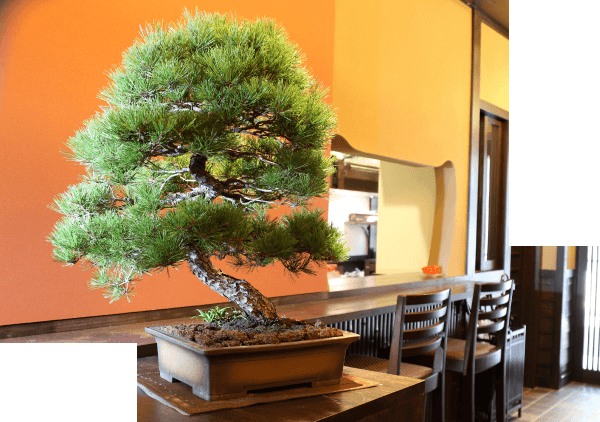 Kyomachiya Luck You Bukkoji Higashimachi is modeled after the traditional Kyoto machiya. Inside of the compact, three-story, 9-room building, you’ll find many age-old novelties unique to the Kyomachiya like the “koshi-mado” (lattice windows), “the inuyarai”, and the “tsuridoko” (a lowered wall for displaying flowers and other ornaments). The bonsai at the entrance and the Shaolin dojo next door contribute to the fresh and unique ambiance. 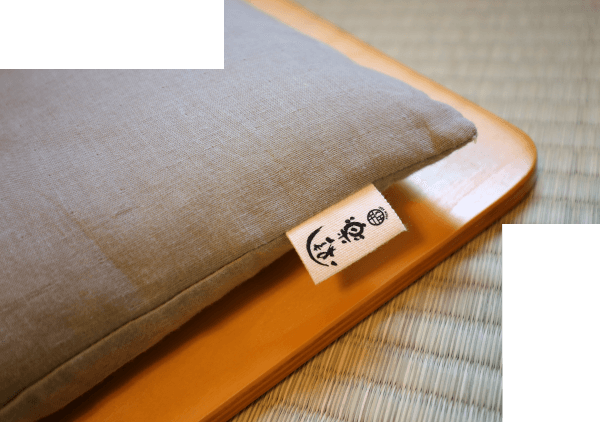 The “noren” we had specially made for us by the custom-order somemonya (dye craft shop) specialist “Shikisa”. The first thing that jumps out upon stepping through the noren and into the lobby is the large, nihonga (Japanese painting) which covers the face of an entire wall. This drawing is the work of an up-coming-artist named Yamaba Haruki, and the cheery painting is a lavish depiction of Japan’s flowers and Kyoto’s various festivals. We put a great deal of care into designing the interior so our guests have an immediate way to interact with Kyoto culture. Air conditioning is also provided in every room to ensure the comfort of your stay.